Transcript from copy held at US National Archives. 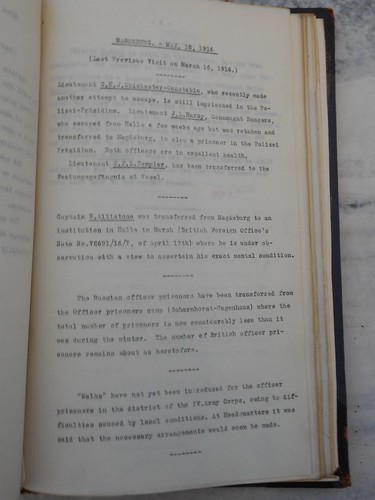 Captain (Major?) George Elliott, Royal Irish Regiment is still the ranking British Officer. There are now 686 officer prisoners in this camp (with accommodation for about 900) of whom 26 are British, 18 having been transferred from Halle a short time ago. In this camp there are now 13 British soldiers serving as officers’ servants.

The new huts with good sized rooms, accommodating two captains or officers of higher rank, are now occupied. The grounds have been enlarged and there is mail more space for exercise. The officers are preparing to hold “Olympic Games”.

The only complaint made was in, regard to the rate of on remittances from England, which has been fixed officially by the German authorities.

Lieutenant C.F.L. Templer has been transferred to the Festungsgefängnis at Wesel.

Captain W. Allistone was transferred from Magdeburg to an institution in Halle in March (British Foreign Office’s Note No 72691/16/P of April 19th) where he is under observation with a view to ascertain his exact mental condition.

“Walk” have not yet been introduced for the officer prisoners in the district of the IV Army Corps owing to difficulties caused by local conditions. At Headquarters it was said that the necessary arrangements would soon be made.

Private H. Ward is still in the lazaret, but has been designated for transfer to Switzerland. The only other British prisoner in a lazaret in Magdeburg is Sergeant Major Ingham, Scots Guards, who was transferred from Stendal soon after that camp had been visited by Messrs. Dresel and Osborne, on March 2nd (report sent to London, on March 7th). Ingham’s wound has now healed, although his sight is impaired, and he is soon to be sent back to Stendal.

Private E. Dougan’s wound has healed, although he still cannot use his right arm, and he has left the Lazaret and been sent back to the camp at Stendal,

This entry was posted in Camp Reports, US National Archives and tagged Jackson. Bookmark the permalink.